Gentle Giant - Horse at Work in the Forest

On October 15, 1987, England was hit by what became known as the "Great Storm". There hadn't been a storm like it in 300 years. Sadly 18 people lost their lives and there were massive amounts of damage to property and millions of trees were uprooted, many in urban gardens and parklands.

The reason I mention it is because the following year, on a trip visiting my family back in England, we came across this scene in the New Forest in Hampshire. Horse power, in it's original form, was being used to help clear fallen trees and brush.

As you can see from the image below, the trees are closely packed in this particular area, and it would have been difficult, not to mention dirty, noisy and messy, trying to clear the fallen timber with tractors. 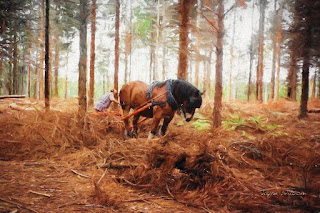 My dad, who was driving, had caught sight of the horses and pulled off to park so we could watch them at work.  Two draft horses waited patiently while their handlers hooked up fallen tree trunks and then they would haul them a few hundred yards to where a truck and trailer were being loaded with logs for removal.

It was fascinating watching man and beast work together.  A very tranquil rural scene.  I snapped several photos, but I liked this one best.

I was recently going through old photo albums - those ones with the "magnetic" plastic pages that somehow never seemed to stick quite right and the pictures always fell out.  I had been removing the photos and dumping the albums.  Photos are either being scanned or stored in boxes.

When I found this photo again, I was so taken with the scene that I wanted to make a digital painting of it.  Working in Topaz Impression, was able to create an image that looks like it is straight off the easel.  I'm very happy with the way it came out.  If you click on the image above, you can see a larger version of it, and see more of the detail.

"Gentle Giant", as I called my digital painting, is available on canvas, prints and greeting cards at JayneWilsonArt.com

I'm also making it available on other products such as mouse pads, a jigsaw puzzle and this iPad sleeve, in my online store, 3D Designs by Jayne on Zazzle.


For more information about the Great Storm, visit the Daily Telegraph website: http://www.telegraph.co.uk/gardening/3344946/The-Great-Storm-of-1987-remembered.html
Posted by Jayne at 3:35 PM