My latest digital artwork was inspired by a recent trip to England, where we visited the lovely Cotswold village of Bourton-on-the-Water.

The Cotswolds is an area in the center of England, known for its honey-colored stone architecture and idyllic village scenes. 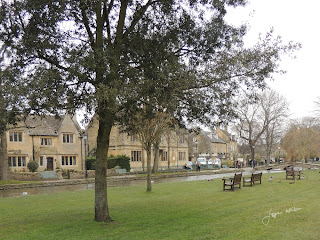 We were not blessed with pleasant weather -- in fact on the day we were there it was "bloody freezing!"(to quote my sister, who took us there) -- but I found myself enchanted as always. This particular village has a shallow stream running through it, as its name implies and there are always ducks around, either in the water, or sitting on the grassy banks.

Feeding the ducks is a popular pastime, in fact it's encouraged.  Several of the little gift shops offered for sale paper bags filled with bird seed, labelled with the words "Feed the Ducks".

That got me thinking and when I got home again, back to my studio and my computer, I began to consider how I might recreate such a scene in Vue.

Luckily, I had some time ago purchased a pack of 3D models from Runtime DNA which had the look of typical Cotswold cottages. I loaded several cottages into the scene and arranged in a row beside the stream, similar to how the cottages are set in the real village.

After creating the basic terrain with the stream channel, I set about finding the perfect texture for the stony stream bed and the water .  Once I had that in, I added grass, benches and trees to fill out the scene. 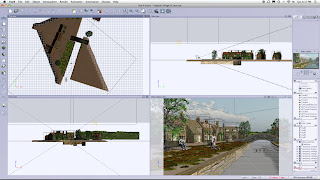 Then it was time to create the figures that would populate the scene.  I envisioned a small child feeding ducks on the banks of the stream.  Here's the figure I created in DAZ 3D.  This render was done in DAZ, prior to the figure being exported to Vue. 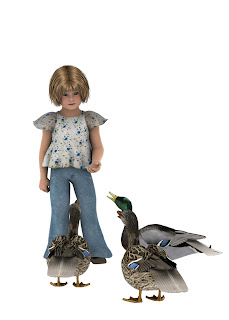 I felt a small child shouldn't be left unsupervised to feed the ducks, so I added a mom and dad to the scene, lol. Dad is sitting on the bench watching benevolently as his wife offers duck-feeding guidance to their daughter. I think I hear the words "mind that big one doesn't peck your fingers!"

My computer was really dragging by the time I got everything in. An "eco-system" like this, with lots of grass or trees, tends to suck up the computer's resources and I had a scare when Vue shut down and then claimed it was unable to open the file again!

Luckily, my computer-savvy husband was able to rename one of the backup files and open it up, so I was able to finally finish the project and do the final render, which you can see below. 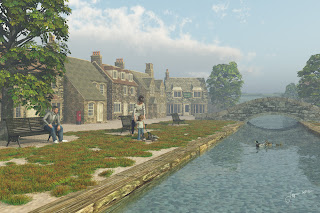 As I mentioned at the beginning, my inspiration for this piece came from a real-life place.

Where does your artistic inspiration come from?  Are the scenes you paint imaginary places, or are they places and people you have seen?