The Making of Dance With Me

When Light, Space and Time Gallery announced their 3rd annual "Figurative" competition, I was hesitant to enter.  I wasn't sure that anything in my portfolio would fit the criteria, but then I remembered "Dance with Me", which I did in 2010.

I had fallen in love with Jack Vettriano's "Dance me to the End of Love" and set about the task of creating a piece with a similar atmosphere to it, using the 3D graphics programs that I was now working with.

It was done in two parts: the background image was created in Bryce 3D and the figures were done in DAZ 3D.

In Bryce, I worked on the ground plane to get a texture that would look similar to the infinite plane the dancers in Vettriano's original were dancing on.

I ended up using a water plane to get the effect I was after.  My dancers are literally dancing on water, lol.

Then I played in the atmosphere editor, positioning the sun and changing the parameters to get the overall color I wanted, and the layer of haze on the horizon. 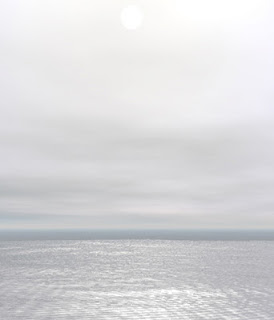 When I had the background the way I wanted it, I rendered it in Bryce and saved it as a jpeg file that could be used as a backdrop in DAZ 3D.

Now came the really fun part - dressing and posing my 3D characters to recreate the scene and capture the atmosphere of the original.

Since the characters start out in the position shown below (only naked), you can see that quite a bit of work is involved in this step! 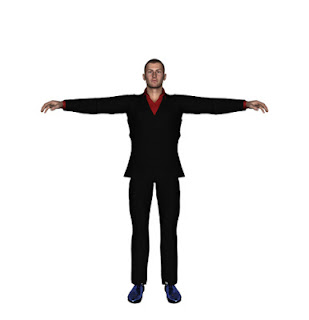 Posing a single character in DAZ is fairly easy, even easier if you use one of the many pre-set poses available.  But posing and positioning two characters in a 3D environment, viewed on your 2D computer screen, offers lots of challenges.

For example, when viewed from the front, you might position your characters to be close together as if they were dancing, but then look at them from above and see that they are actually quite some distance apart from one another.  The same can happen if you look from the left or the right too.

So as you work and pose and create your scene, you have to constantly view the scene from all directions to make sure everything is working together.

Eventually, I got my dancers the way I wanted them, as close as I could get them to the dancers in Vettriano's original.  Then I adjusted the lighting to blend with the atmosphere on the background and clicked on RENDER. 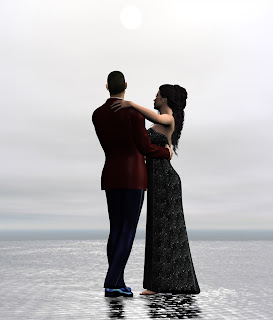 Finally I did a little bit of post work in Photoshop Elements - I used the dodge/burn tool to give the illusion of a reflection of the dancers and anchor them to the ground plane, then it was finished.

So, going back to the beginning of my post, when I got the notice about the "Figurative" art competition in April, I went ahead and sent in my entry to Light, Space and Time and now I'm very happy to announce that "Dance with Me" earned a Special Recognition Award!!

The competition received 592 entries from 23 different countries from around the world so you can see how much of an honor this is for me!

All of the winners can be seen here.  My thanks to John Rath for his work in running the Light, Space and Time online gallery and for giving artists like myself the opportunity to participate in competitions and be included in exhibitions.
Posted by Jayne at 12:47 PM