We live to the north of Houston, Texas, in the small town of Tomball. We love the atmosphere of a small town, and are very happy here.  Near the big city, but not IN it.

Each year Tomball hosts a number of outdoor festivals, such as the German Heritage Festival and "Bugs, Brew and Barbecue", Tomball's own version of Oktoberfest. Always lots of great entertainment, food, beer and lots of stalls selling all manner of stuff.

Earlier this year, I was excited to hear that a new festival, Easels and Diesels Art Festival was open for registration. The "Diesels" part of the name stems from the fact Tomball is right on a railroad track and the entire train depot area has been revitalized and now hosts a multitude of events.

The Easels and Diesels Art Festival is a juried art festival with music, food and beverages, and of course, ART.

I wanted to be part of it this year and sent in an email to get the information.

THEN I started thinking about the logistics about participating in this show...

First, since it is juried, I would have to be accepted, that's the first hurdle.  I'm thinking it may not be much of a hurdle since I've already been to two other live shows and online competition as well.

BUT, this wouldn't just be a case of hanging a painting on a wall in a gallery.  Since this is an outdoor show, I would need to provide my own 10 x 10 tent such as the one below. 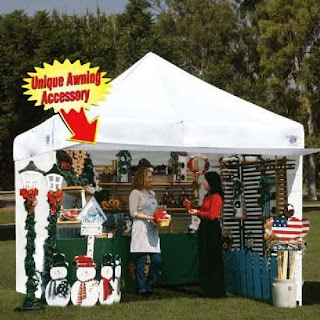 Then I started thinking about how I would need INVENTORY.  The one good thing about making my art available through Print On Demand sites like Zazzle and Fine Art America is that I don't have to maintain an inventory.  But if I want to have my own stall in a festival, I'm going to need inventory, which I would have to pay for up front.

In addition to a few nice display prints, I would need smaller prints, postcards, greeting cards and other items such as ceramic tiles with my art on.

Deductible business expenses all, but I mustn't over extend myself.

So.... the plan is to go along to this year's festival and see how it's all set up, how it's run etc. and get a feel of "could I actually DO this?"

(I'll let you in on a secret - I am painfully shy and tend to keep myself to myself.  I would probably sit in the back of my tent and try to hide under the table if someone looked like they were going to approach me!)

THEN, if I feel like it's something I could do and would enjoy, I've got a whole year to get my act together and get the tent, the inventory etc.

Then perhaps I could take the whole show on the road and participate in other outdoor art shows.

In the meantime, I've been accepted to another event, the Jomar Visions Art Excellence Juried Open Competion.