Back in February, I blogged about an art program I had recently purchased, called Topaz Impression.  You can see that post here.

Since then I have spent many happy hours working in Impression to create original artworks from my photographs, as well as using it to enhance some of my digital artwork created in Vue or DAZ.

In my blog post today, I am going to share my latest series of digital paintings, called "Picture Postcard Cottages."

I'm originally from England and whenever I go back home to visit family, my dad always enjoys taking us out for a ride in the car to visit some picturesque village he has discovered.

One day, he took us out into Hampshire, to the village of Micheldever located between Basingstoke and Winchester.

It's the most picture perfect collection of thatched cottages and I took literally hundreds of photos!

To create this series, first I took my photographs into Topaz Impression and processed them with a variety of painting and drawing effects, saving each version as it's own jpeg file.  I primarily used the presets that come with Topaz, with the idea of blending and changing opacity and depth later in the process.

Each of the final images consists of at least two, sometimes three layers, blended to allow the layer underneath to show through and with strategic masking to get the effects where I wanted them.

I really like the vintage postcard appeal of this series.

The first of the series is Heather Cottage, and according to the Micheldever Village website it was built around 1600. 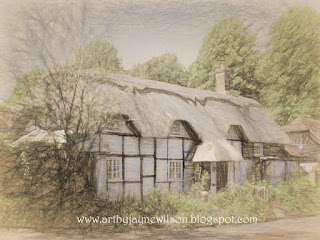 Excerpted from Micheldever Village website:
The original property was probably just 2 rooms, one up and one down. The bedroom still has a wattle and daub wall made of dung and straw, and there is a doorway which is only 150cm high (less than 5 feet).

It would appear to have been extended during the 17th century, hence the irregular front timbers. There is a small window looking down church Street and it is rumoured that it was used as a look-out to warn visitors if there was a press-gang coming up from the river. The well is still inside the property and was still in use in 1964. 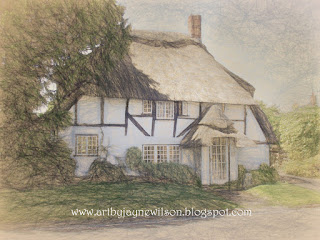 Old Cottage, built in 1580.
Available on prints and cards

Excerpted from Micheldever Village Website:
The Old Cottage was built in 1580. The central part of the cottage was a smoke bay into which the chimney stack was later inserted. 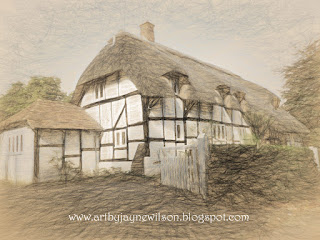 Thatched Cottage in Micheldever
Available on prints and cards

I'm not sure what the name of this cottage is, but it appears to have been built around the same time as the others. It's timbered, as are many other buildings in the village, and thatched, although an outbuilding on the left has since been roofed with tile.

I hope you've enjoyed this "virtual visit" to a lovely village, and that you like what I did with my photos.
Posted by Jayne at 4:19 PM