I've always been an artsy, crafty type. Going back to when I was single and living at home with my parents, I loved painting, sewing and macrame etc. Even when I moved to the U.S., I enjoyed working with my hands and being creative.

Through circumstances beyond my control, I eventually ended up sharing my living space with a number of furry felines. And cats do kind of get into stuff...

I couldn't paint because things would get knocked over, or a furry body would brush up against the canvas, or pieces would disappear.

Because of this, my artistic side took a back seat for several years, until my then fiance introduced me to the 3D graphics program, Bryce in 2004.

I was excited that I would once again be able to get creative and the cats wouldn't be able to get into it and since then the rest, as they say, is history.

But wouldn't you know, the cats started working themselves into my creative side again.  But not in a bad way this time.

My husband got me an awesome camera with which I've been able to capture some nice photos of the cats. And recently I've been playing around in Photoshop Elements 11, adding textures and using different blending modes to come up with some artistic, painterly images.

I thought I'd show you a couple of my favorites here:

This first photograph shows one of our younger cats, a black and white "Tuxedo" cat named Jester. 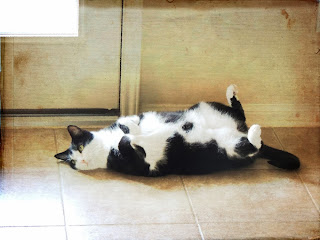 Jester is a real character and when we were thinking of names, we realized that he was as entertaining as a court jester, and so he got his name.

We rescued Jester, his siblings and his mother, after they were abandoned in our neighborhood. They have enhanced our lives so much, we can't imagine life without them, even if it does mean our house is chock full of cats.


The second photo is of Missy. 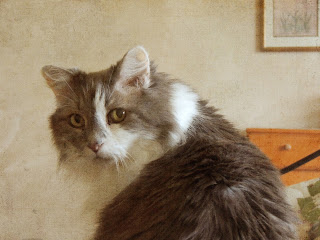 Missy is a grey and white domestic long-haired cat. She was the runt of her litter and had to be hand fed every two hours for the first week of her life until she was able to hold her own among her rambunctious siblings and nurse for herself. She grew up into a beautiful cat even though she is still tiny, compared to most of our other cats, who are all big honkers. I love how she is looking directly into the camera in this photo.

Remember in the first paragraph I mentioned I used to do macrame?  Didn't it seem like back in the 70's macrame was everywhere?  Well it's back!  At least in my house it is.  I've designed and made several macrame plant hangers for our patio, as well as an owl wall hanging.

I'll have to show you those on another day :-)

I hope everyone had a great weekend, now it's back to the grindstone.  Work really does get in the way of art... grumble, grumble...