When my husband and I first delved in to Vue, by E-On Software, we downloaded the freebie "Personal Learning Edition" which offered all the features of the full version, but with some restrictions.

First of all, it limited the size of your render. and second it put a large logo in the corner of the image.

But it allowed us to see the possibilities of the software and to start playing around with it enough to discuss purchasing the full version. 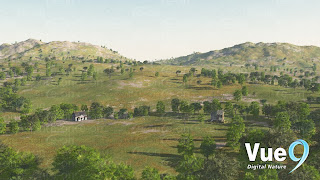 When, after a certain amount of time, every single render with the "PLE" had multiple watermarks checkered across the image, we finally decided to go ahead and make our purchases. That was sometime in 2011.

Vue comes in several editions, from the Extreme (all bells and whistles and then some - the sort of program used to work on CGI movies like Avatar) down to a stripped down version that I forget the name of.

We went for the Esprit version, which is somewhere in the middle price range, and we added on a couple of modules for increased functionality -- the Ecosystem and Ecopainter modules, (in my mind, probably THE most impressive feature of Vue which allows you to populate your scenes with vegetation - grasses, plants, trees etc.) and also the Botanica module, which allows you to edit plants and trees.

The very first scene I worked on once I had my new software installed was a scene with a quiet stream with reeds and trees along the banks.  I played around with several different atmospheres until I found just the right serene misty look I was after.

And just for good measure I added a family of ducks that were created and posed in DAZ 3D and then imported as a Wavefront Object into Vue.

I named the piece "Lazy River" and it has remained one of my favorite artworks. 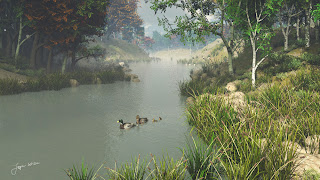 A month or so ago, I decided to enter it, among some other pieces, into an International Juried Art Competition organized by the Light, Space Time, Jupiter, Florida.

I just found out today that it earned a Special Merit Award! Apparently, the gallery received 673 entries from 24 different countries and from 36 different states and the District of Columbia, so to earn a Special Merit award is a huge honor!


Excuse me while I pat myself on the back :-)