A few weeks ago, I submitted my entries into the 5th Annual "Animals" International Juried Art Competition, sponsored by Light Space and Time Gallery, in Jupiter, Fla.

The results have just been announced and I'm very happy to be able to announce that two of my pieces won awards!

In November the gallery conducted the 5th Annual “Animals” Online Art Competition. 2D and 3D artists (including photography) from around the world were called upon to make online submissions for possible inclusion in to the Gallery’s December 2015 online group art exhibition. The “Animals” theme was considered to be any art which depicted mammals, birds and any animals that live in the water for inclusion into this art exhibition. 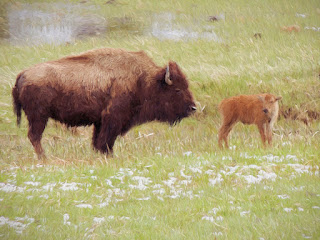 My first winning entry, “Bison and Calf in Yellowstone”, earned an Honorable Mention, placing it in the top ten entries in the Photography & Digital Category!   This digital painting is based on a photograph I took while Eric and I were on our road trip to Yellowstone earlier this year.  It's available as prints and on canvas on my artist's website 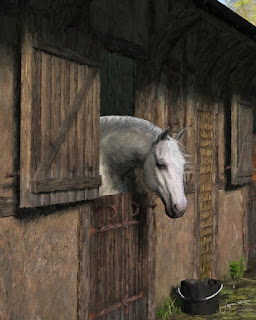 In addition, “White Horse at the Stable Door” earned a Special Recognition, placing it in the top 60 entries in the Photography & Digital Category. This digital painting started out as a 3D render that I created in DAZ 3D.  The final render was then treated with digital painting techniques to give it a painterly feel.  It reminds me of the cover art of the "pony books" by English authors like the Pullein-Thompson sisters and Ruby Ferguson that I adored when I was a young girl.  This piece is also available on canvas and prints, as well as pillows and tote bags, on my artist's website.

I was thrilled to have two entries included among the winners - quite an accomplishment with over 700 entries!