One of the difficult things I come up against when discussing my art is that many people have no concept of what 3D art is.

After all, the end result is a 2D image on a computer screen, or if you have it printed, on paper or canvas  -- right?

The following relates to the program I use, Vue, but other 3D programs have the same sort of interface.

Whenever you open a new scene in Vue, the display shows four views of the scene -- Top View, Side View, Front View and Main Camera View. You can click on the image below to see it enlarged. 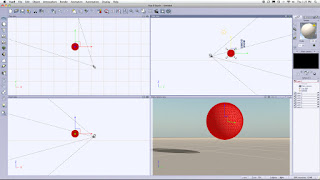 In to that scene, you load objects - which can be primitive shapes, such as this sphere, but also  terrains, trees, buildings or anything else. Then you use the "gizmos" (the blue, green and red arrows in the above image) to move the objects along the x, y or z axis and position them within the 3D enviroment of Vue.

That's where the 3D part comes in. In addition to moving the terrains and other objects within the 3D environment on your screen, you can move the camera around and point it in different directions for different points of view. 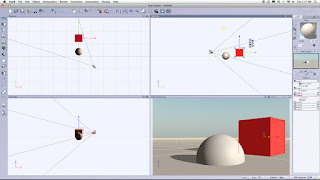 Once you've loaded an object or terrain, you can apply a texture -- Vue comes with a lot of textures built in, but you can also create your own for a custom work, or purchase textures for use in Vue. 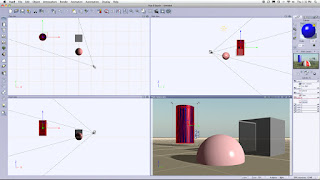 As you work, you can do "test renders" to see how things are progressing since the Main Camera view (bottom right on these images) doesn't give the full detail on work in progress. 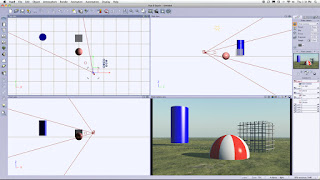 As you can see in the image above, the lighting is coming from the right, so the shadows are to the left of the objects.  But the lighting, like the textures, is totally customizable. You can change the atmosphere by loading one of the built-in pre-sets, or by going in to the Atmosphere Editor and changing the angle and direction of the sun, adding cloud layers etc. 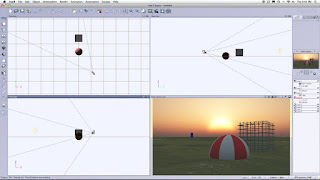 And finally, you can set the quality of detail in your final render.  The more detail, the longer the render time.

As I mentioned above, I use, Vue, by E-On Software. It's a very powerful software which offers different levels of functionality, from the hobbyist level to the CG professional - it has been used to create the scenery in movies such as Pirates of the Caribbean II, Avatar and Indiana Jones and the Crystal Skull, to name just a few.

I have the middle "artist" level, Vue Esprit, to which I added some extra modules for added bells and whistles. Naturally, shortly after I purchased Vue 9, they came out with Vue 10, which had some new features.  And now they are on Vue 11.  I'm still learning to use Vue 9, an upgrade will have to wait!

If you want to give it a try, you can download a fully functioning Personal Learning Edition - the only down side to the PLE is that after a certain amount of time, it places watermarks on your finished renders, and a logo in the corner.

One thing I didn't mention in the steps above is probably one of the most fun parts of working with Vue - the Ecosystem painter.  I'll show you that in more detail on a future post but for now I will show you a finished work, created from start to finish in Vue, with no filters or other Photoshop tweaking.  I titled this piece "Heartland" and it placed 4th in the Digital/Photography category and 7th in the Overall Winners Category at the Second Annual "Countryside" art competition at Light, Space and Time Online Gallery. 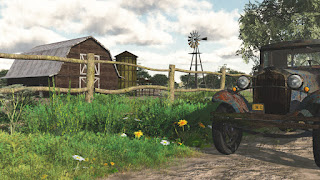 It is on permanent display in the November 2012 Countryside Art Exhibition.
Posted by Jayne at 7:45 PM