The Making of The Easter Bunny

A few weeks ago, I wanted to create a 3D scene in Vue that I could use for Easter products. After struggling to get the exact scene I wanted all in Vue,  I ended up doing a mixed media piece.

I started out by rendering a scene with a cluster of Easter eggs, nestled in some long grass and dandelions, with a background of tree-lined fields, and a nice hazy spring atmosphere. 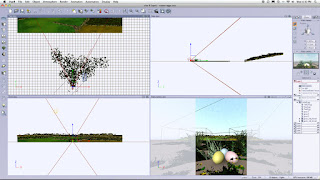 I played around with the angle of the camera, and aspect ratio to give me a portrait format image, suitable for cards, and with a nice amount of sky at the top where the greeting would go. 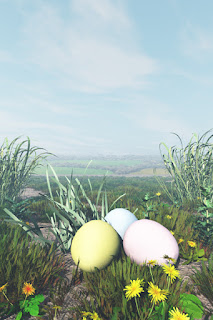 Once the render was complete, I opened the resulting image file in Adobe's Photoshop Elements, created a new layer and added a sweet Easter bunny, which is a png file from Bez Boardman and Antje Darling's ABC's Hi-5 Springtime kit at Renderosity. 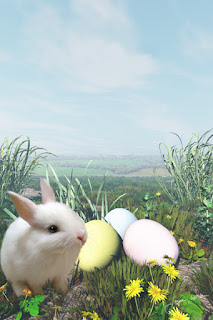 I'm really happy with the resulting image (although now I look at it critically, I see the lighting on the bunny isn't the same as on the eggs).

Then I had fun with it in my Zazzle store and used it on cards, postcards, gift boxes and I just love it on this plate:

It was a creative project that I really enjoyed - the first time I have tried to layer one of my original 3D renders with a 2D graphic file.  I think I learned some things (that lighting, for one!) and I look forward to improving in the future :-)
Posted by Jayne at 7:06 PM