A Peek Inside the Studio and the Making of "The High Country" (or "Do Keep Up, Tonto!")

It was my birthday last week. We won't go in to details, like how old I am, but I wanted to give a shout out to my wonderful husband, Eric, who willingly parted with a hefty chunk of change to replace my three year old iMac with a new 27 inch iMac.

So I thought I'd give you a peek inside "Mockingbird Studio" and give you an idea of where I work on my art projects. 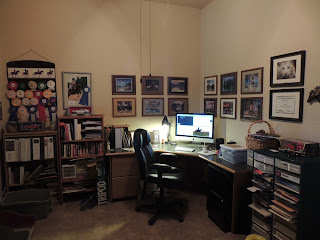 The fact that the new monitor is much bigger than the one I had before (a mere 21 inch) caused me to have to rearrange my studio.  I used to have my computer on a small desk to the left of this photo, facing over a half wall into the living room and the garden beyond.

The configuration of the desk, with a little printer stand on the side, really didn't work with the bigger monitor.  So I decided to move my new computer over to my former craft desk, which hasn't actually been used for anything other than lounging cats, in the five years we have lived here.  Well that's not quite true -- I sewed some window valances three years ago, but that's about it.

I love this layout already.  There's more actual desktop, so I've got room for some desk accessories and when I want to pay bills, I don't have to shuffle things between my lap, the desk and the drawer.

So what am I working on with my new iMac?

Well, at the art show last weekend, I was talking with one of the other artists and we talked about a scene where a cowboy would be up on a ridge, surveying the scene below, perhaps with a herd of cattle or bison or something.

The thing is, when I started playing around in DAZ and started working on posing the Genesis figure on the DAZ horse, I ended up with the cowboy looking back behind him, and leaning his hand on his horse's rump, like he's waiting for the rest of the riders (or perhaps his trusty sidekick, Tonto) to catch up!  (Thank you to Judy Adamson, a fellow artist who lives in Wales, who came up with the subtitle when I first posted the finished render on Facebook, asking for suggestions for titles)

Once I had the horse and rider the way I wanted them, I saved them as a wavefront object which I would then be able to import into a variety of other 3D graphic software. 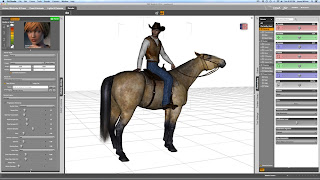 Then I opened up Vue, the software I use for creating landscapes and scenery.  I created a foreground terrain and added some weeds and grass to it and placed the horse and rider in the scene, being sure to make sure they weren't either floating three inches above the ground, or sinking down into it.  Then I grouped horse and rider together with the foreground terrain and camera and raised everything up above the ground plane and tilted it forward slightly, to give the illusion of standing on the edge of the ridge looking into the valley. (You can see that grouping in the top right hand segment of the photo below). 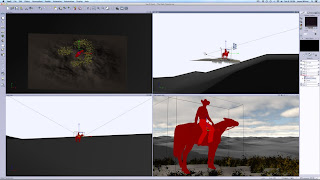 Vue gives you four different views at once, so you can see your scene from the front, from the side, from the top and finally, the "camera view".   This will be what you see in the final render - it's the view on the bottom right.

Once I had the horse and rider standing on the ridge, with the valley spread out below, I set about finding a suitable atmosphere for the scene. Vue has a multitude of atmospheres built in, or you can set about creating your own by manually adding layers of cloud, positioning the sun, setting the lighting model and many other functions.

For this scene, I selected one of the atmosphere presets and the moved the sun around until it appears that horse and rider are being highlighted from the side by the sun as it moves lower in the western sky. 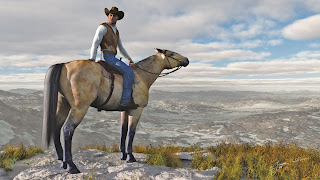 I adjusted the levels in Photoshop Elements 11 as the shadows were just too dark in the original render that came out of Vue.  I'm very happy with the result.