The Making of Country Lane in Fall

Fall is my favorite season. I love fall colors, even though we really don't get much in the way of fall color here in Texas.  It seems to me that the leaves stay green until they just drop off the trees here.

That could be why I enjoy creating artwork which features fall colors.

A couple of weeks ago I started working on a new artwork which I entitled "Country Lane in Fall".

What follows is a little detail about how I created it in Vue.  I'll show you the actual image at the end of the post :-)  As always, you can click on the images to see a larger version.

I had an idea of what I wanted, but creating it in Vue was a bit of a challenge as my technical skills are still lacking in some areas.  I'm just not very good at sculpting terrains yet.  Usually, I load a standard heightfield terrain and squish it almost flat. 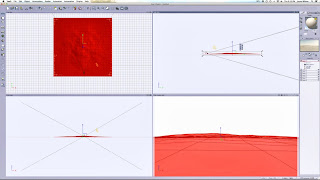 That creates a nice enough base for many scenes.  I often use something like that for the foreground and then add hills in the background.

But for the scene I had in mind, I wanted a country lane, complete with cart tracks, or tractor tracks in the dirt.

Some time ago I watched a video tutorial which showed something similar to what I wanted, and it used a "heightmap", basically a greyscale image that Vue would blend with it's own fractal terrain to modify it.

So first, here is the standard heightfield terrain in Vue.  There are all sorts of tools for tweaking it and creating impressive terrains but I'm still learning how to use them. 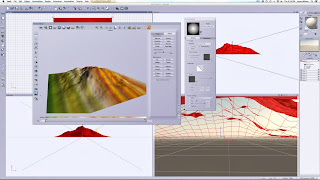 Next, in Photoshop Elements, I created a new file and "painted" a country lane.  I used a fuzzy edged brush in grey to create the lane and then a darker color to create the deeper tracks.  (lighter colors create higher terrains, darker colors are lower) 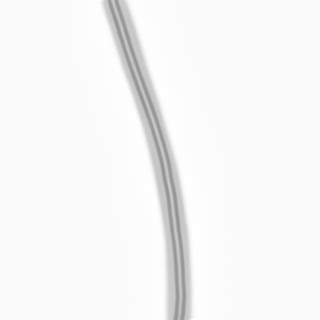 I selected roughly 50/50 between the two.  It gives you a rough (and I do mean rough) preview of what it will look like before you hit ok. 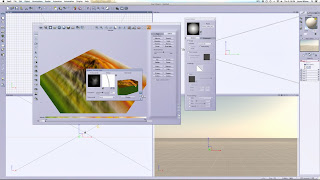 It was still way too deep for my taste - I wanted cart tracks, not WW I trenches, so I flattened the whole terrain down considerably until it looked something like this: 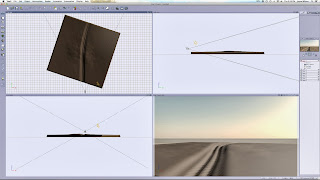 Next came the fun part of adding in the texture, the trees, grasses, weeds etc. placing the fence and getting the atmosphere the way I wanted it. 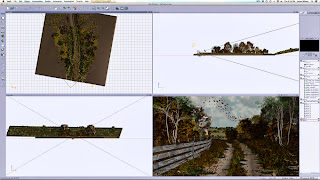 This took me literally days.  I would think I had it done and would render it, which involved leaving it to run on its own for three hours. Then I would come back and look at the render and decide I didn't like something, or discover some glaring error which couldn't be fixed in post work.

At least twice I just left the computer rendering while I went to bed, so I wasn't able to get back to the piece until I got home from work the next day.  (Work really does get in the way sometimes)

But finally, I had something I was happy with:- "Country Lane in Fall" 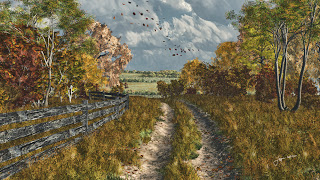 While I really like the original version above, this evening, I played around with it in Photoshop Elements, applying filters. (I don't have Filter Forge, like many digital artists, although if they have a version that will work with Elements on a Mac, I may shell out the bucks for it).  Instead I used the Paint Daubs filter and really love the Impressionist feel it gives the image. 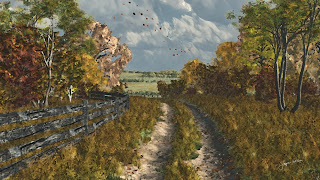 I'm not sure if the Paint Daub effect is even visible at this size, but on a full size 26 " x 15" original, it looks great.  Or at least I think it does, I'd love to hear what others think, if you can even see it at this resolution and size.

I'm now in a quandry as to which version to use as my final image that I post on Fine Art America and that I use to create products for my Zazzle store.  I *think* I'm leaning toward the Impressionist version.  What do you think?